John Miller is something of a detective in his facility management job as director of cluster engineering for Marriott's Southern California hotels. When a plumbing, heating, or cooling snafu occurs in one of the 13 hotels under his supervision, it is Miller's job to root out the problem and preserve the comfort of guests. Guest comfort is the highest priority for Marriott International, which for several years has topped the list as Fortune Magazine's most admired company in lodging. 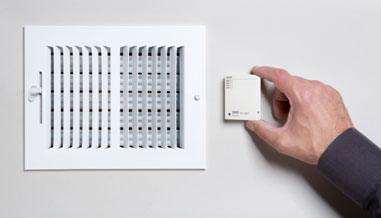 While Sherlock Holmes relied on his magnifying glass to uncover clues, Miller's favorite facility management tool is an Onset HOBO® data logger, a small, portable electronic box that can gather a wealth of information about the inner workings of a building, including the performance of lights, pipes, heaters, coolers, wires, and appliances. The battery-operated device contains a microprocessor, memory, and sensors that measure temperature, humidity, light, and other parameters. Highly portable, a data logger can typically be deployed anywhere in a building and operate unattended for days, weeks, or months, collecting data that can be later downloaded into software, providing hard analysis, not just opinion, about the source of a building system problem.

Lack of hot water is clearly not acceptable to Marriott guests. So Miller finds himself relying on facility management tools, such as data loggers, to troubleshoot water flow in pipes. For example, there was the case where the water in one hotel would mysteriously run cold and lose pressure at certain times of day. Then it would fix itself for no discernible reason.

"We had no idea what was going on," Miller said. "So we hooked up pressure and temperature sensors to data loggers and used them to monitor the system on specific floors. Because we are able to put the temperature loggers anywhere on the system, it's really beneficial in tracking down and isolating flow and temperature problems within a distribution system." With Onset's HOBO U12 data loggers, Miller isolated the problem to a particular floor. He then placed the data loggers alongside a pipe on that floor and measured water flow pressure. He discovered a faulty flow-reduction valve.

But Miller did not stop there. He also installed a data logger to analyze the city water supply and found the problem extended beyond the hotel. The city's water pressure was dropping in repeated, momentary spurts, and the hotel's faulty valve had been unable to compensate for the sudden plummets. Miller submitted the data logger findings to the city, which then made the necessary repairs to its system.

In another situation, one of the hotel's boilers kept dropping off line. Miller again set up HOBO U12 data loggers to measure temperature changes on the boilers as well as on a remote control and monitoring system. He discovered a problem within the monitoring system; one of its sensors was measuring the temperature incorrectly and causing the boiler to shut off at the wrong setpoints. This was occurring because the energy conservation sensor had not been installed in the correct part of the system.

Miller was first introduced to data loggers three years ago at a seminar held by Marriott for building engineers. Since then he has used them every few weeks. Next, he plans to take advantage of their energy monitoring capabilities to evaluate building energy efficiency, which is another common use for the devices.

He particularly appreciates the HOBOware® graphing and analysis software, which is used to plot and analyze data collected with the HOBO loggers. "It is very easy to use. That's one thing I really like about Onset's product, versus some of the others that are on the market."

Onset offers several types of data loggers, customized to particular uses for building or facility managers. The HOBO U10, for example, offers a low-cost way of monitoring multiple locations. The HOBO U12 offers large memory for long-term deployments. Miller said he uses them "like a tool box item. I have a couple of each of the data loggers, and I just keep them in stock all the time."