Data loggers were installed on roofs of neighboring buildings to demonstrate the energy efficiency of white versus non-white roofs.
Application Story

Introduction: A Tale of Two Roofs 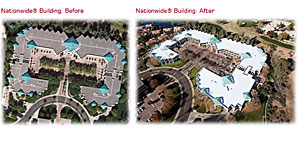 After 18 years of extreme desert heat, the roof of the Nationwide® Scottsdale Insurance Company headquarters building in Scottsdale, Arizona began the natural deterioration process. The maintenance staff had been chasing leaks for nearly five years when they hired Alan Stevens Associates, Inc. to solve the problem and bring their roof system into the 21st century.

The original roof system was a ballasted EPDM over 4" of R-20 roof insulation on a concrete roof deck, and blanketed by 2" of river rock. Compared to the modern heat resistant roofing systems used in Arizona today, this was fast becoming a major liability in regards to structural integrity, maintenance costs and energy consumption.

The new cool roof system installed by Starkweather Roofing in December 2008 consisted of 3" of R-19 ISO board insulation with a tight-set roofing adhesive glued to the concrete roof deck, and a self-adhesive Polyglass Eastoflex SAV base sheet and PolyKool cap sheet over the top. This roof system is capable of withstanding Arizona's infamous extreme temperatures and rapid temperature changes of the summer monsoon season.

The PolyKool sheet is white with a reflective surface (solar reflectance index value of 84) that not only meets all current and proposed energy performance standards, but also withstands constant foot traffic, ponding water and residual chemicals from the building's cooling towers.

For more information on this massive project, please read the article written about it in the July/August 2009 edition of Western Roofing Magazine.

At the request of the Arizona Cool Roof Council in July 2009, Starkweather Roofing set out to determine if white roofs are indeed cooler and more energy efficient than non-white roofs. The Nationwide® Scottsdale Insurance Company roof was a perfect choice for this in-depth cool roof study.

On the morning of August 6th 2009, Chris Walker and Sherm Robison of Starkweather Roofing installed HOBO data loggers from Massachusetts-based Onset Computer Corporation directly on the roof surfaces and in the low-traffic, non-air conditioned stairwells of both the Nationwide® Scottsdale Insurance Company building and a building next door in the same corporate plaza (which still has the original ballasted EPDM roof system in place): It was a perfect "before and after" condition, being that the results would be based on identical weather conditions as opposed to data from one year to the next on the same building, where many different variables could negatively affect the results.

The temperature sensors on the roof surfaces were secured under the exact materials used in each of the current roof systems, as to not allow for the direct sunlight to impact the readings and to give an accurate surface temperature on each building. The temperature sensors placed in the non-air conditioned stairwells were secured three feet from the roof hatch and directly to the concrete roof deck to measure the energy efficiency of the roof systems (in other words, they measured how much heat was being transferred through the concrete deck into the inside of the building).

The sensors measured both the roof surface and stairwell temperatures on both buildings every hour, 24 hours per day from August 6th to September 4th. Official temperature data for Scottsdale over the same time period and at the same time intervals was obtained as well. During the data collection period Scottsdale had primarily hot sunny days, with a few monsoon storms sprinkled in, which allowed for near perfect test conditions.

The conditions of this study were considered near perfect for multiple reasons. First, it involved virtually identical buildings that were side-by-side. Second, one building had the old roof system and the other had the new cool roof system – so a before-and-after analysis could be conducted at the same time and under the same conditions. Finally, a concrete deck is not typical in Arizona (plywood decks are much more common). If the data proved any significant increase in energy efficiency in a building of this construction, it would be known with certainty that even greater results would be gained in a building of typical Arizona roof construction.

Our Analysis and Conclusions

The first thing that caught our attention was the significant reduction of thermal shock, which is a direct result of the more consistent cool roof surface and internal building temperatures of the PolyKool roof.

Thermal shock was minimized by slowing down the rate of temperature change (both up and down) on the roof surface, which in turn nearly eliminated the rate of temperature change inside the building. The only other way to minimize thermal shock is to use materials with much greater strength, increased thermal conductivity and reduced coefficient of thermal expansion – but that approach is more expensive and doesn't guarantee as favorable of results.

Based on this data, we would suspect that the August kilowatt consumption of the building with the PolyKool roof should have reduced by approximately 7.00% or more from the previous year (when it had a ballasted EPDM roof), assuming all other items remaining equal.

In August 2008, Nationwide® Scottsdale Insurance Company headquarters building in Scottsdale, Arizona consumed 719,000 kilowatts of electricity. According to maintenance supervisor Chris Peterson, all other items remained virtually unchanged from 2008, and that the installation of the PolyKool roof system was the only substantial difference in 2009. In August 2009, the kilowatt consumption was 663,000 – a 7.79% decrease (or $5,450) in electricity required to cool the building (much more energy efficient).

Again, this is on a building with a concrete roof deck. Also note that the PolyKool cap sheet only has a solar reflective index (SRI) value of 84. If the building had a plywood roof deck (which is much more typical in Arizona) and if the SRI value of the materials used were higher (100 is typical of most high-quality roof coatings), the energy savings would be even greater. Starkweather Roofing has begun performing similar analysis using buildings with plywood roof decks as well as higher SRI value roof coatings to compare the results.

The PolyKool cool roof is on average 12 degrees (13.57%) cooler than the EPDM roof. But that includes overnight when there is no direct sunlight.
Figure 2.1 shows that 12:00pm is the largest difference in roof surface temperature over the course of our study, when the average outside temperature was 96.66°F. The EPDM roof was on average 156.28°F at that time, but the PolyKool roof was only 128.59°F. That's a difference of 27.69 degrees (the EPDM roof is 26.69% hotter). Between 9:00am and 5:00pm (the maximum sunlight hours), there is an average 22.40 degree (18.55%) difference in roof surface temperature - quite significant to the long-term survival of rooftop equipment (as well as the building's facilities workers).

As demonstrated in Figure 2.2 below, the rate of roof surface temperature increase between 6:00am and 8:00am were similar on both buildings, but the EPDM roof kept getting hotter while the PolyKool building started to level off. Also, the PolyKool building cooled off more gradually than the EPDM building, which heats up really fast and becomes extremely hot, and then cools down at a faster rate (although it never gets cooler than the PolyKool roof). It isn't until 7:00pm when they come back to the same rate of temperature change. This is another indication of reduction in thermal shock with the PolyKool cool roof.