Food waste represents the largest component of the solid waste stream reaching landfills and incinerators in the U.S. (EPA 2011). Consequently, composting of kitchen scraps is becoming increasingly popular as an environmentally-friendly means of reducing solid waste, while creating a beneficial soil supplement. The addition of animal-based kitchen scraps to residential compost piles has long been discouraged on the grounds that it attracts scavengers. Although reasonable, surprisingly this claim has not been tested experimentally.

To determine whether the addition of animal-based kitchen scraps really does affect scavenger visitation, we at Trinity College's biology department are in the midst of an experiment in a rural residential area in eastern Connecticut, using three compost piles. One pile receives strictly vegetable scraps and another a mix of vegetable and animal product scraps, while a control pile receives no scraps, but is otherwise manipulated like the other two piles. Visitation to each pile is recorded with wildlife monitoring cameras. We are currently preparing to publish our findings from the first phase of the study. To date 29 species (13 birds, 16 mammals) have been documented at the piles. Overall patterns generally show higher visitation to the pile with the mixture, but with interesting seasonal shifts in the primary scavenging species.

As we move beyond the initial question, we are eager to see how other environmental factors affect scavengers. For example, we hope to determine whether temperature influences scavenger foraging behavior. Food scraps are provisioned at the piles on a six-day cycle. One might predict that under cold temperatures, when endothermic animals are stressed energetically as they thermoregulate, competition for kitchen scraps may be more acute and thus visitation would be concentrated soon after provisioning. This early visitation pattern may also hold under hot conditions, when scavenger competition with microbial decomposers likely intensifies and animals must utilize the scraps before they become too spoiled. However, under intermediate temperatures, one might predict a more drawn-out pattern of visitation between provisioning events.

To examine how temperature affects foraging behavior, for several years we have been using Onset data loggers (HOBO Pendant® UA-002-64) to monitor temperature near and within the piles. Recording the air temperature near the pile is rather straightforward. The logger is attached to the north side of a nearby tree by anchoring it with a plastic cable tie to a bungee cord that encircles the trunk. Deployment of a logger within the pile is a little more challenging, as the device must be secured to prevent its removal by foragers. To achieve this, we place the logger in a wire mesh envelope that is tethered to an iron reinforcement rod driven into the ground to mark the pile’s center. This approach has generally worked well. However, we recently had our first instance where an animal took off with a logger. The camera images revealed that the culprit was an eastern coyote that managed to loosen the wire tether (Fig. 2). Fortunately, the coyote did not find the HOBO very tasty and dropped it not far from the pile, with no apparent harm done.

At the completion of each round of the compost experiment, which lasts approximately 90 days, the data are retrieved from the loggers. Microsoft Excel is used for analysis and plotting. Based on their corresponding time stamps, wildlife images and temperature recordings are automatically categorized as diurnal or nocturnal, using an Excel array containing a download of the study site’s civil twilight table from the U.S. Naval Observatory web site.

As part of a citizen science venture, we have recently developed an on-line field guide to the compost pile visitors. After studying the field guide and passing a quiz, you can view and categorize actual images from this ongoing experiment via our on-line database. Happy viewing! 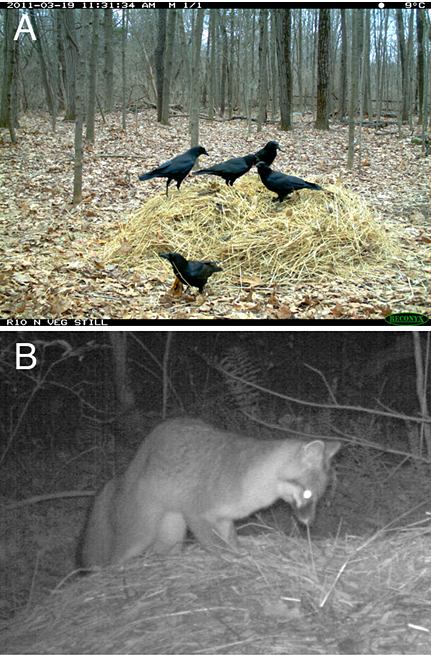 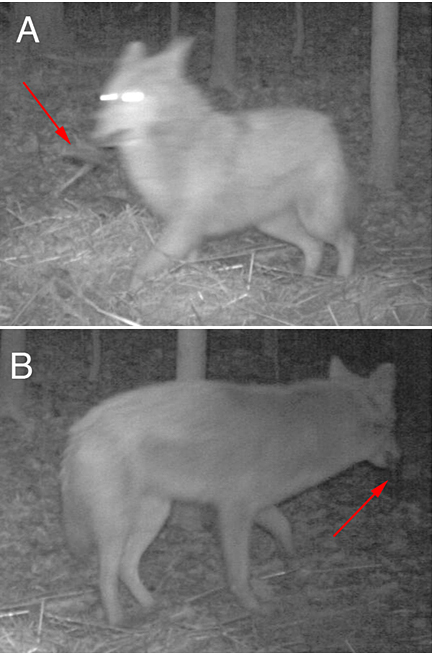