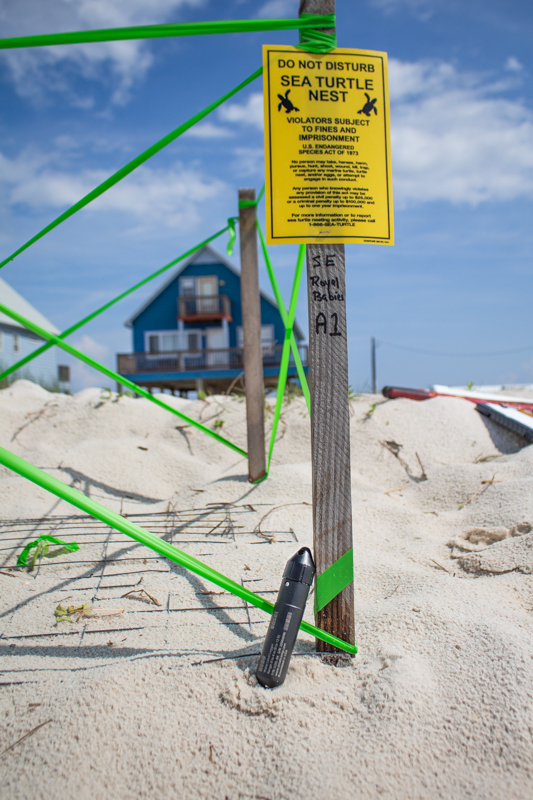 Imagine you have been dropped off at a beach and told to stay in one place for two months, despite high temperatures, wind, rain, and rising tides. You have no parental care, only a foot of sand over your head, and just a thin, leathery shell for protection. Welcome to the early life of a sea turtle.

To develop properly, sea turtle embryos require a narrow range of incubation conditions. Among the most critical is the appropriate amount of moisture – not enough and the embryos desiccate, too much and they drown. Groundwater inundation from high tides or severe storms poses a serious threat to developing sea turtles.

Across Alabama’s Gulf Coast, several groups have collaborated to document sea turtle nesting and protect nests from inundation and other threats. These groups include the 400+ member, all-volunteer citizen-science group Share the Beach, the U.S. Fish and Wildlife Service staff at the Bon Secour National Wildlife Refuge (BSNWR), and researchers from the Florida State University Marine Turtle Research, Ecology, and Conservation Group (FSU MTRECG).

In an effort to improve hatching success, staff are taking nests laid in proximity of the previous day’s high-tide line and moving them closer to the dunes. This can only be done within 12 hours of the nest being laid, however, as moving the nests later than that can cause embryonic mortality. Identifying high inundation-risk areas from which to remove nests and tracking inundation events when they occur have become tasks for FSU MTRECG Ph.D. candidate Matthew Ware and his advisor Dr. Mariana Fuentes.

“Inundation is not inherently lethal, but sea turtle managers don’t know how long developing embryos can ‘hold their breath’ or how this tolerance may change as the embryos grow. Previous efforts have not provided data with sufficient precision to answer these questions, which are crucial for improving nest-management decisions,” said Ware.

In the summer of 2017, with the help of Share the Beach volunteers and BSNWR staff, Ware deployed ten HOBO U20L-04 water level loggers at experimental sites on the Fort Morgan Peninsula. The purpose was to test whether the logger would perform better than previous methods (PVC pipe devices) used to assess sea turtle nest inundation. After the test, Ware concluded, “Though designed for aquatic use, the U20L-04 loggers performed admirably when used on the beach. The user-customizable sampling intervals and sub-centimeter measurement accuracy ensured that water level data could be collected at biologically-relevant scales, particularly during severe weather when it’s unsafe for researchers or volunteers to be out on the beach.”

The comparison of HOBO U20L-04 loggers with past inundation-measurement methods showed that the HOBO loggers were more precise and gave researchers a wider scope of data than was previously available. Specific details on the comparison can be found in the Journal of Experimental Marine Biology and Ecology. Following these initial successful experimental tests, Ware deployed HOBO water level loggers at 11 loggerhead sea turtle nests. Though three of these nests were washed away by Tropical Storm Cindy, data loggers at six of the remaining nests recorded groundwater inundation events. For the upcoming 2018 sea turtle nesting season, Ware intends to place water level loggers at as many nests as possible along the Fort Morgan Peninsula in order to provide insight into the inundation tolerance levels of the developing eggs.

When thinking of the bigger picture, Ware noted, “Using HOBO data loggers to measure inundation does more than simply improve our understanding of sea turtle biology. Marking marine turtle nests for protection attracts a great deal of public interest, and the installation of monitoring equipment tends to prompt a lot of questions. This interaction offers a tremendous opportunity to engage in discussions about marine conservation and other environmental issues with the general public. The HOBO data loggers have become a valuable tool for connecting our scientific study with the public’s interest in conservation.”