A local landmark in San Francisco, the Flood Building is a 12-story commercial structure that was built just after the turn of the last century and survived both the 1906 and 1989 earthquakes. So in that city’s view, it’s an old building indeed.

Therefore it may be surprising that, thanks to an energy retrofit by local engineering firm Carbon Lighthouse, the Flood Building’s 290,000 square feet are carbon neutral, and boast energy efficiency and operating costs comparable to modern efficiency-conscious construction.

As one part of a major retrofit of the 350-tenant site, Carbon Lighthouse used occupancy/light sensing data loggers from Onset (Bourne, MA) to determine whether energy and money could be saved in the building’s restrooms. These battery-powered devices can be easily mounted on ceilings, light fixtures, and stairwells – anywhere data are needed. The loggers have two integrated sensors, and together they continuously collect time-stamped data at user-defined intervals. They also feature a large LCD display that visually confirms logger operation, signal strength indication that ensures proper logger placement, large memory capacity that enables longer deployments with fewer site visits, and a USB 2.0 computer interface for full-speed data offloads.

The bathrooms’ existing lighting was linked to occupancy sensors that were several years old. Carbon Lighthouse first wanted to assess whether those existing sensors were working correctly, and then determine whether the lighting runtime would justify replacing them with more efficient equipment. 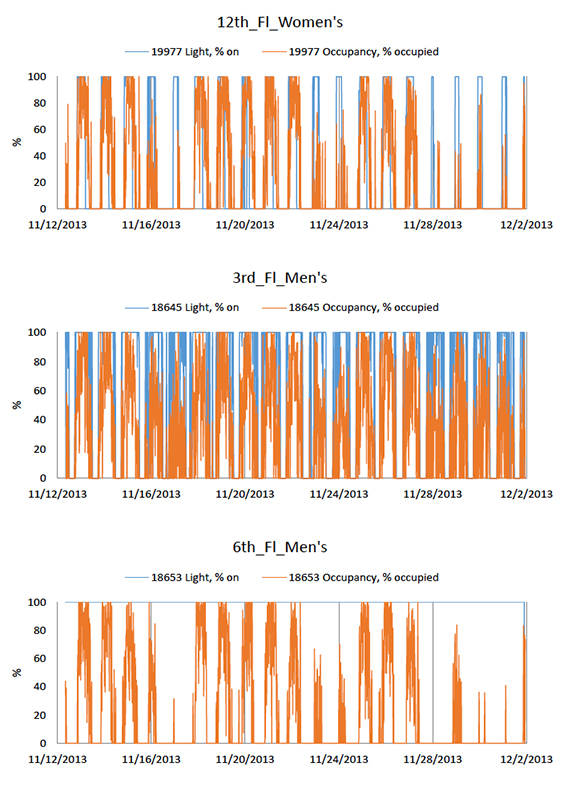 In today’s marketplace of constant innovation and new energy-efficient products, it seems like a no-brainer to replace all the restroom lighting with more energy-efficient fixtures. But, as Matt Ganser, Director of Engineering at Carbon Lighthouse, explains, “In new construction it makes sense to take advantage of the most energy-efficient systems. But in a retrofit of an older building, you have to approach it differently.”

“In commercial buildings like this, there are often systems running 24/7, and those systems are often targeted for an upgrade. By first looking at occupancy, we can learn about realistic control changes to make that will save time and energy.”

In the case of the Flood Building’s restrooms, the Carbon Lighthouse team determined that eight would statistically represent the total number in the building. According to Ganser, it took less than an hour to deploy the palm-sized, battery-powered occupancy/light loggers and take field measurements including ballast, bulb count, type, etc. The loggers were then left to collect data for three weeks.

The data were downloaded from the loggers using Onset’s HOBOware® Pro software and imported into Carbon Lighthouse’s own application.

“It’s easy to do,” said Ganser. “We can go from raw data to decisions in minutes. The data showed that occupancy was mostly between nine am and six or seven in the afternoon, significantly less than half of a 24-hour period. Of the three representative data sets, the first two clearly show well-functioning occupancy and lighting integration, whereas the third shows an instance where the lights were just on all the time.”

According to the data, the existing occupancy sensors were working successfully to control the lighting, with the exception of the one men’s room. There was no need to spend money on replacing the occupancy sensors throughout the building. The next step was calculating whether it would make sense, based on the lighting runtime, to upgrade the lighting. It did not.

“Manufacturers always want to sell new products, and utility programs incentivize new equipment rather than encouraging controlling existing systems more efficiently,” said Ganser. “Just because a new piece of equipment is more energy efficient than the existing equipment, the cost of replacement may not justify its purchase, especially if you can use after-market controls to boost efficiency. You can always replace equipment and reduce power, but it doesn’t always produce sufficient cost savings. You can get better bang for your buck elsewhere.”