A California nonprofit is using water temperature data loggers for long-term monitoring of the coral reef system surrounding the island of Kosrae in Micronesia.
Application Story 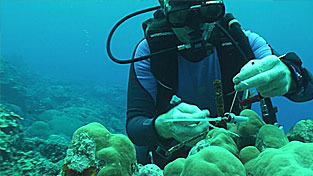 Twenty-five hundred miles southwest of Hawaii, some five degrees north of the equator, lies the island of Kosrae, the easternmost of the four states of the Federated States of Micronesia. This 42-square-mile island is surrounded by a rich fringing coral reef, recognized as one of the most pristine in the Western Pacific. Since 1996, a group of island stakeholders, including representatives of the Government of Kosrae and a private ecotourism operation, have collaborated with Oceanearth, Inc., a California 501(c) 3 nonprofit organization, to support a long-term monitoring effort tracking the health of the reef system.

During the first two years of the project, more than 55 mooring buoys were installed, ringing the island, and helping to protect the reef by offering local fishermen an alternative to dropping their anchors on the delicate reef structures. At the same time, 15 of the mooring sites were selected to become permanent environmental monitoring locations.

Since then, on at least an annual basis, scientists and lay volunteer divers have joined together to inventory and assess the extent and health of the coral cover surrounding the island. At the same time, population inventories are taken of fish species targeted for food and the aquarium trade as well as invertebrate species commonly used locally and for export. 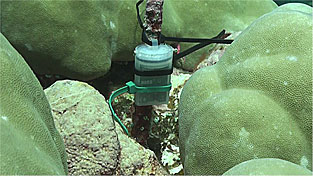 As part of the annual surveys, various environmental measurements are taken, such as weather and water conditions, visibility, temperature, salinity, and pH. Early on in the project it was recognized that single-point measurements of water temperature were informative for visibility measurements, but had relatively limited research value for prediction or understanding of changes in reef health.

In late 2008, the first set of four HOBO® Pendant Temp/Light compact loggers was installed at various critical sites around the island where evidence of coral bleaching events had been previously observed. These water temperature data loggers were attached to rebar driven into the reef substrate at approximately 30-foot depths and left in place for up to nine months, collecting temperature and relative insolation data every 15 minutes. Three of the first set of four compact data loggers were successfully recovered in mid 2009 and the data downloaded, providing the first-ever look at reef long-term temperature cycles for this or any Federated States of Micronesia state.

The collected data is expected to assist in discriminating temperature effects from other environmental and man-made stressors. In addition, it is hoped that insolation data will be useful in forecasting the occurrence of coral spawning events.

After data recovery, the data loggers were given battery replacements in the field and returned to the monitoring sites for another year of service. Efforts at improved placement and securing of the data loggers resulted in all four being recovered and re-installed in October of 2010. The data loggers have performed flawlessly to date, providing researchers with an ongoing stream of valuable water temperature information. The ease and speed with which data recovery, battery replacements, and maintenance can be performed allows rapid redeployment within the limited on-site time available to researchers. Future plans include the deployment of additional HOBO data loggers at other locations around the island where water temperature variations are believed to influence coral growth and survival.