Leaving classroom lights on while no one is using the rooms wastes significant energy. To overcome this problem, campuses across the county have installed occupancy sensors that automatically turn off lights after rooms are vacated for a certain period of time. However, these sensors can malfunction and are often difficult to identify as broken. As a result, students and professors leave lights on unintentionally for days at a time, wasting kilowatt-hours and costing universities money. 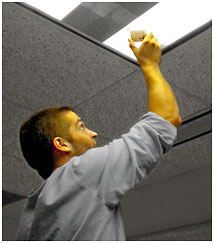 California State University Long Beach (CSULB) is one university affected by this problem. CSULB energy efficiency interns became aware of this energy issue and set into motion a plan to identify faulty occupancy sensors. Interns Allie Bussjaeger and Felix Navarrete, to date, have tested approximately 25% of CSULB classroom sensors. By identifying faulty occupancy sensors, they have potentially saved 31,000 kilowatt hours to date, which translates to $4,000 cost savings for their campus.

The average CSULB classroom contains 14 fixtures holding two 32-watt light bulbs each. Energy inefficiency adds up fast when even one of these classrooms remains lit overnight. Bussjaeger and Navarrete, members of the Alliance to Save Energy Green Campus Program, learned other campuses used HOBO® data loggers to identify faulty occupancy sensors. Bussjaeger and Navarrete continue to work under the supervision of Paul Wingco, campus Energy and Sustainability Manager, to install HOBO U9 Light On/Off data loggers in campus classrooms.

The HOBO Light On/Off data logger measures 45 x 60 x 20 mm and records light status. The light threshold adjusts from 10 to 100 lumens/m2. Additionally, these loggers can record up to 43,000 on/off changes. The time-of-use loggers are installed in classrooms for one week. Then are removed for download and data analysis. Using a light sensor and microprocessor, the loggers record minute by minute when lights are turned on. If the data indicates lights remained on the entire week, then the occupancy sensor is deemed not working. If the data shows lights were on for several hours after 10:00 pm, then the sensor is likely dysfunctional.

With only 25% of the campus completed, the interns estimate CSULB will save 125,000 Kilowatt-hours per year as a result of identifying defective occupancy sensors on the entire campus. As far as dollars are concerned, CSULB will potentially save $16,000 per year. "Because of new state budget cuts, departments are encouraged to come up with cost savings ideas," says Paul Wingco, CSULB Energy and Sustainability Manager. "We often receive calls letting us know lights are on in the buildings in the middle of the night. I am thrilled with our intern's initiative and prowess to find a solution."