The push to develop natural gas resources found in Marcellus Shale, a low-density rock formation that underlies portions of the Delaware River Basin in Pennsylvania and New York, has been intensifying rapidly. Although drilling for natural gas has remained outside the basin thus far, in anticipation of future gas development, the Delaware River Basin Commission (DRBC) began monitoring area rivers in 2010 to obtain baseline water quality measurements for post-development water quality comparisons.

Hydraulic fracturing, or fracking, is the proposed method for extracting natural gas from the source rock in the Delaware River Basin. The process involves drilling wells to reach deep target shale formations and injecting water and chemicals into the layers to release the gas. The flowback water that the procedure creates contains potentially toxic chemicals, and the wastewater is typically stored at the well site for later treatment or disposal.

Fracking is a controversial issue, with many environmentalists concerned that the process would result in negative ecological impacts. Others, however, see the creation of a quarter million jobs, an opportunity to satisfy up to 14 years of the country’s natural gas consumption, and the added benefit of harvesting a fuel that burns cleaner than coal or oil.

Comprehensive monitoring is key to understanding environmental consequences that might be caused by hydraulic fracturing activities. Therefore, the DRBC has implemented a new monitoring program that looks at different parameters typically affected by natural gas development, including electrical conductivity levels in river water, which can be an indicator of contamination. In August 2009, for example, high conductivity levels were observed in West Virginia’s Dunkard Creek, and over the next month or so nearly every aquatic species along a 35-mile stretch of the waterway was lost, possibly due to nearby hydraulic fracturing.

As part of its “Monitoring for Natural Gas Development” program, the DRBC’s Monitoring, Modeling & Assessment branch has deployed HOBO® U24 conductivity and temperature loggers in the Delaware and Lackawaxen rivers and in two more creeks in Pennsylvania where drilling is likely to take place first. Low-profile concrete bases were constructed for the logger installations by pouring concrete into a saucer sled. Two short aluminum pipes jut out from the concrete base, and a horizontal PVC pipe with holes lies affixed to the base to house the sensor, which is secured with zip ties. The placement of the sensor within the PVC pipe minimizes bubbles as well as sediment that might otherwise accumulate on the sensor. 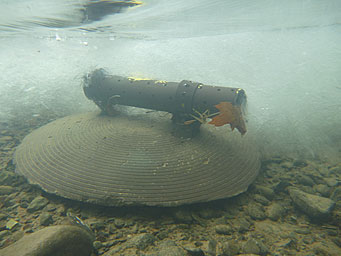 Before deploying the loggers, DRBC staff tested the devices’ accuracy against other meters, measuring a variety of low- and high-conductivity waters such as ultra-pure lab water, tap water, and salt water, and found them to be in agreement. Staff members periodically retrieve the loggers and download readings using a HOBO waterproof data shuttle, which the DRBC’s Environmental Engineer and Section Supervisor John Yagecic notes, “…allows us to easily download data in the field.” After the data are downloaded, the loggers are cleaned with distilled water and redeployed.

The Advantages of HOBO Data Loggers

The DRBC chose HOBO data loggers because it needed devices that could be set up quickly and guarantee a hassle-free launch of the project. Time was of the essence, since it was not known when gas companies would begin drilling, and without substantial data on pre-drilling water quality the degree of change within the rivers would remain a mystery forever.

Data loggers that can withstand harsh weather conditions were also a requirement for the monitoring program, since logger deployment sites are subjected to cold temperatures and periodic high flows. The DRBC was delighted to learn that HOBO data loggers deployed in similar conditions were unaffected by Hurricane Irene, which touched down in the Northeast in the summer of 2011. Yagecic is also pleased to report that since their deployment in January 2011 the loggers continue to tolerate debris moving downstream and, “…have proved to be an inexpensive solution for high-risk deployment.”

By defining the range and variability of specific conductivity measurements prior to natural gas drilling, this monitoring program will help the DRBC to protect precious water resources in the Delaware River Basin.