A consulting firm deployed a variety of data loggers to determine which energy-saving equipment best fits the needs of a facility, and calculate the potential return-on-investment.
Application Story
Image 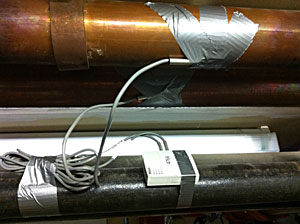 Overview
The Vermont Community Foundation (VCF) is a tax-exempt public charity based in Middlebury, Vermont. The VCF oversees 600 funds and ranks among the top 10% of community foundations in the country. It manages more than $154 million in assets and awards $10.5 million in grants annually.

With its eye on the future, the VCF is developing a plan to decrease its carbon footprint as part of an investment in environmental stewardship. Already, a portion of the energy the organization consumes is produced from bio waste, plus staff members recycle food scraps and other organic material in their very own vermicomposting system.

Challenge
The VCF is housed in a three-story, 9,000 square foot facility that generates $25,000 in utility bills each year. Three dollars per square foot is a high price to pay, especially considering that the HVAC system is relatively new. Because Middlebury offers no natural gas utility services, the building’s closed-loop water-source heat pump system is fueled by more expensive energy sources: electricity and propane. The VCF calculates it will spend $465,000 in total energy costs over the next fifteen years, based on a conservative 3% per year price increase.

To get a handle on building energy use, the VCF called in Kilawatt Technologies, a leading energy management consulting firm based in Shelburne, Vermont. The goals were clear: determine which energy-saving equipment best fits the needs of the facility, and calculate the potential return-on-investment of the new equipment.

“The data loggers we used made it possible for us to collect large quantities of diverse data in a short amount of time,” says Steven Antinozzi, Chief Operations Officer at Kilawatt. “Fortunately, the devices come at a reasonable cost, making our data-driven tactics possible.” 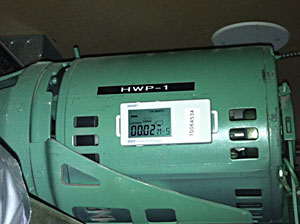 Antinozzi and his team used a variety of deployment techniques that depended on installation locations and available surfaces. For example, they attached Onset HOBO® UX90 Motor On/Off data loggers directly to loop motors using the loggers’ integrated rare-earth magnets. For this deployment, they did not need a current transformer, since turning on the motor creates a magnetic field. Monitoring this magnetic field determined on/off cycles and run times.

To log zone temperatures, the engineers attached additional HOBO U12 loggers discreetly in office areas. They attached data loggers to metal ceiling vents with the self-adhesive magnetized rubber strips that came with the devices. Engineers set these data loggers to record every fifteen minutes to monitor realized temperatures and setbacks.

Results
After charting and studying temperature data, Kilawatt engineers learned that the boiler fires at full power when outdoor ambient temperatures are as high as 60°F. Furthermore, amperage data led to the discovery that the cooling tower runs during the same time intervals as the boiler. This was understood to be due to the loop overheating. The data also showed that:

Kilawatt’s team recommended four key actions for the VCF based on collection and analysis of data logger data.

First, they suggested that the foundation install new HVAC controls—specifically, thermocouple-based thermostat, CO2, and humidity sensors. They also recommended a web-enabled system for centralized and automated control of the HVAC system. At a cost of $15,000, these new controllers will remove unnecessary use of the boiler, cooling tower, and supporting equipment. After careful calculation based on data collected, the Kilawatt projected that the controls would pay for themselves within four years.

The consulting firm also recommended the VCF purchase an energy recovery ventilation system. At a cost of $50,000, this system will decrease heat pump use and allow for smaller heat pumps, while increasing ventilation.

The team further suggested building shell improvements that, based on the data, would realize a realistic payback and improvement in comfort. The shell repairs included installing air-lock doors at the front entrance and low thermal emissivity windows tuned for low external reflectivity and maximum retention of heat. This improvement will address the acute temperature problem experienced by office workers and the building’s overall outside air-infiltration issue. With the new doors and windows in place, the VCF will better manage its HVAC system and save energy costs. Engineers calculate these purchases will yield a payback based on energy savings in fourteen years. However, it will provide an immediate “payback” in occupant comfort.

Finally, the consulting firm recommended the VCF use a solar photovoltaic energy solution to achieve its long-term net-zero goal. The suggestion was to install a Southern Vermont ground-mount system with an annual output of 135,000 kilowatt hours. At a cost of $100,000, the new system is predicted to pay for itself within six years and leave the facility energy independent for the rest of the building’s lifetime.

High-yielding and high-quality investments are few and far between. Capitalizing on energy efficiency and energy independence is smart business. With the implementation of these enhancements, the VCF theoretically could save (or yield, depending on one’s perspective) $215,000 over the next fifteen years.